For the first time ever, Judy is offering FREE SHIPPING on purchases made on November 26 ~ 29!
This applies to all items in her art shop; www.JudyAGoddard.Etsy.com

and...
her Knitting/Crochet supplies Shop; www.finishthis.etsy.com! 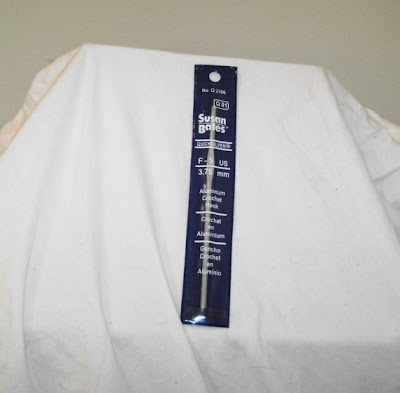 I've just found a new weekly challenge that I can participate in! It's at;
www.dthaase.blogspot.com
And Here's my first entry; 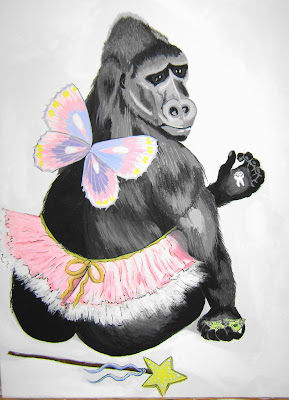 This is our tooth gorilla. He comes in the night and leaves crumpled dollar bills under our pillows when we loose a teeth. What he does with the teeth he collects, I have no idea!
When my children were very little, I came up with a way to celebrate joyous occasions in our house without leading them to misconceptions about truth and stories.
The tooth fairy, Cupid, the Easter Bunny and Santa were concepts I chose not to teach my children. I wanted them to be very certain of the difference between truth and make believe. But I still wanted them to be able to join in the fun related to the occasions surrounding these special events.
Thus was born the "Tooth Gorilla"! When you lose a tooth you put it under your pillow and the tooth gorilla will come while you are asleep and leave you a crumpled up dollar bill. (Gorillas are not real careful with money and often carry it in their tight fisted hands.)
Next came the Easter Gorilla, who hides your easter eggs. You will be certain to find a few cracked ones. (Gorillas don't have very good small motor skills, so they often drop the eggs while hiding them.) Sometimes he comes the night before and sometimes he comes while we are in church, remembering with joy how Jesus rose from the dead.
And, of course, there is the Valentine Gorilla who will show up sometime when no one is looking and leave a battered valentine and a box of chocolates. (One or two candies are sure to be missing, since the valentine gorilla has a sweet tooth and can not help himself!)
Odd? Quirky? Effective? For us, yes!
Next, I am working on Santa's Helper. He will be the focal point of my Christmas Card this year.
Posted by Judy Goddard at 1:56 PM 4 comments: Links to this post

I was born on December 29, a verrrrry long time ago. And I always loved having my birthday that close to Christmas. My mom always made sure that I gotthe same kind of birthday treatment that my brother and sisters got, as their birthdays were spread throughout the year. So, on December 29, I'd get a whole new pile of presents to open!
It was like having Christmasall over again! I created this canvas growth chart to be as cheerful as I could imagine. Itbrings back memories of my childhood, when the world seemed bright and shiney the whole week of Christmas vacation.
And, of course, when I was measured to see how I'd grown throughout the year, it was on the doorpostinto the kitchen.
I want Christmas birthday kids to have a growth chart that they can point to that is as pretty (or handsome) as the other decorations inthe house. And I want them to be able to point to it as adults, to show the children in their lives how they grew and grew.
I think this makes my Christmas GrowthChart a really special gift. 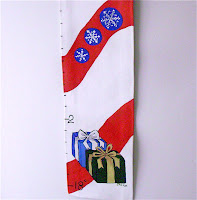 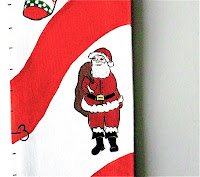 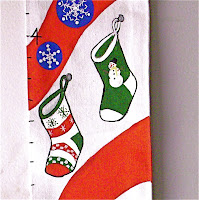 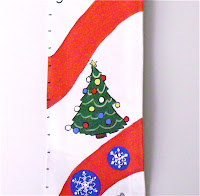 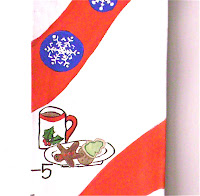 But I don't want to leave the older generation out! So, I have designed Christmas themed walking canes, for the older and the infirm.
I get such pleasure from sitting down, doodling a design out and then seeing it appear on a functional item that brings beauty and service together so well.
I see elderly folks in the super market, the mall, the craft shows, with plain and (dare I say it?) Unattractive canes. But it's so easy to get a cane that will lift their spirits and the spirits of those who pass by them, in this special, special season. 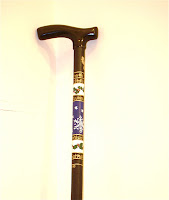 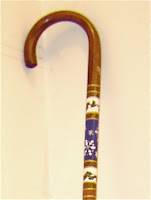 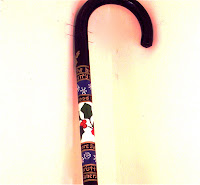 And I think that makes my Christmas Puzzle Canes a really special gift!
To purchase either of these gift ideas, or others like them, visit my on line shop;
www.JudyAGoddard.Etsy.com

Posted by Judy Goddard at 8:05 AM 2 comments: Links to this post

Angela has a sense of humor. And she loves to hide and jump out at the dog. We call it playing, "Grizzly Bear." She gets up on her haunches and waves her front paws in the air, just like a rearing Mama bear!!
Poor dog! She just rolls her eyes at us and says, in her doggy way, "Why is this happening to me?" 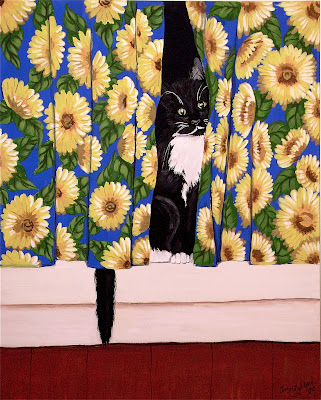 Angela loves to hide in the bathroom. You see, we live in the deep woods, with no neighbors so we have no curtains on any of our windows. Who would want to shut out veiws like ours?? But, of course, we do have one.... in the bathroom. So Angela goes in when noone is looking and conceals herself and waits until someone comes in to sit on the "throne" and just gently lets her tail droop down. Then she silently bends down and peers at you from under the hem of the curtain. 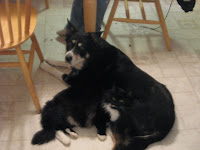 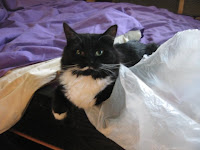 Posted by Judy Goddard at 2:07 PM 13 comments: Links to this post

I'm Being Featured in Becklee's Blog!

Becklee Cottage is a new friend from the ranks of my Etsy team, Inspiration Avenue. She asked for volunteers who would like to be featured in her blog. So I jumped right in!
She's done a really good job. You should go and see! 80)
http://www.beckleecottagedesigns.com/etsy-3/tuesday-feature-judy-a-goddard
This is the link to her Etsy shop;
http://www.etsy.com/listing/61170112/unique-gluten-free-cakecup-with-holiday?ref=v1_other_2
She sells her handmade jewelry and these incredible little teacups with a cupcake in each one! How clever is that?? She even sells a gluten free "Cake Cup Cupcake!" 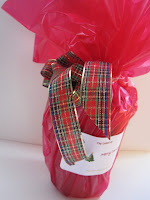 Go now, and check out all the cool stuff at Beckleecottage.etsy.com!
Posted by Judy Goddard at 6:13 PM No comments: Links to this post

Community; It Takes a Village...


My son, who is now 28 years old, started his Boy Scout career when he was 6 years old. By the time he was 7 he had decided that he would one day become a Eagle Scout. As he progressed up the scouting trail we signed on as well. 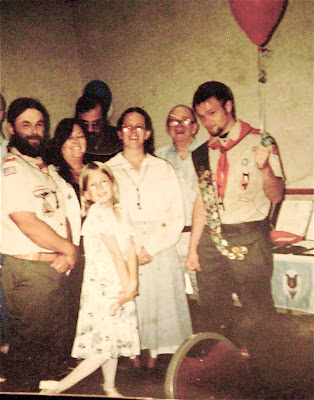 My husband became an assistant scout master in 1993, the same year I joined the troop committee. And one thing that was clearly apparent was the wonderful parent participation in our troop. There were six or seven assistant scout masters and a dozen or so committee members. In 1999 Tom became the Scout Master. And in 2002 I started my time as Venture Crew Advisor for my daughter's crew.
From 1993 to today, Troop 114 has seen aprox. 35 Eagle Scouts. IMHO that's monentous! (Only 2% of boys who join scouting make it to Eagle.)
My daughter's crew is the only co-ed crew that has had any success over a period of 8 years.
(I don't say this to toot my own horn, but to point out the importance of parent participation) 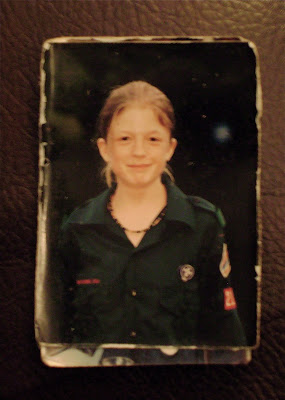 Scouting is one of the pillars of our family life. It makes a positive difference in the lives of almost every child who joins. It not only builds character but equips youth with the social skills to be successful throughout their lives.
As adult members of the BSA we have joined a family of leaders and teachers who have enriched our lives and shown us love in many, many ways.
So, I can say without reservation, that when the village joins together, the child is raised well and learns to fly, very high indeed! 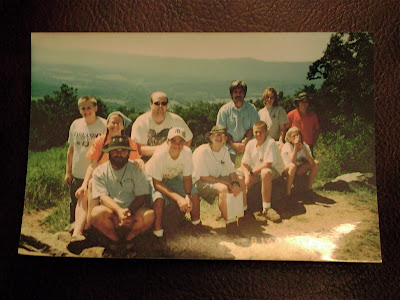 To purchase this canvas growth chart, or others like it, visit;
www.JudyAGoddard.Etsy.com
Posted by Judy Goddard at 10:41 AM 7 comments: Links to this post 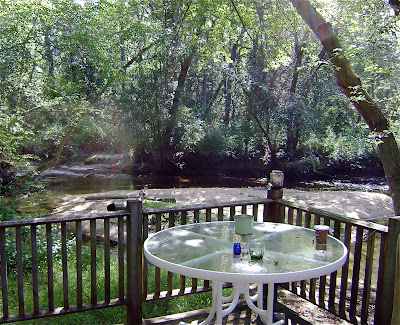 My husband and I own a farm. On our 16 acres are three houses. One we live in, and the other two were kept rented, to cover our mortgage and taxes. A couple of months ago we decided to see if we can survive without renting the little house. It's a two room "bungalow", or cabin, or efficiency. On September 1, 2010, it officially became known as the "Oongalow". And as such, I moved in to my very own studio! 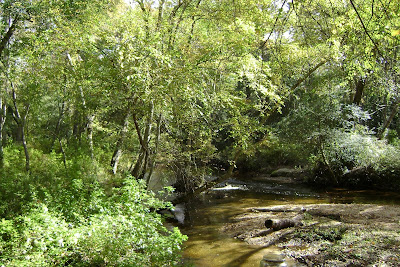 I now have a place to go and create and get lost in my work, not have to hear the phone ring and spend hours that fly like minutes, only to regret that it's time to go back to the house.
What a magical place I've been given! Down the rutted road, under the ancient, leaning trees, to the little cabin with the aged siding that blends so perfectly into it's natural surroundings, and truly looks as if it's always been there or that it had been planted and simply grew there. 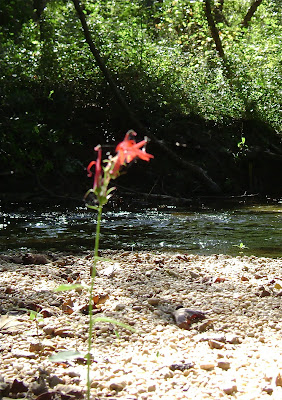 Out onto the deck, you can lose your breath, it's so beautiful! There, right there, Right There is the creek that flows and eddys right at your feet. There's the sand bar with the phantom wild flowers that just pop up, brought down the stream by some storm or happy, pooping, little bird. I listen to the woodpeckers, the blue jays, the house wrens and watch the flocks of wood ducks that fly up into the trees and then fly up and off to the far bank when I open the sliding door to get a better look. The other day hubby and I watched a pair of great blue herons fly over, on their way south.
I am sometimes greeted by the kayakers and canoers who paddle past on their way to the estuary and out to the sea. 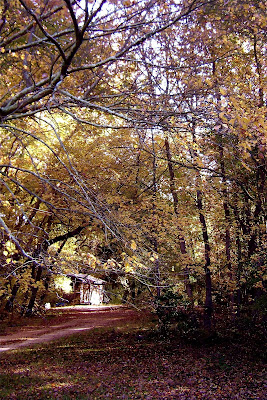 This, this gift, this is what happiness means to me.
Posted by Judy Goddard at 4:42 PM 13 comments: Links to this post