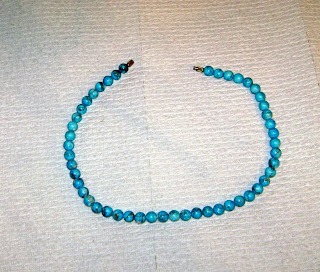 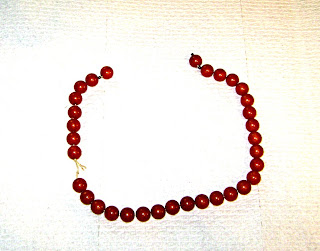 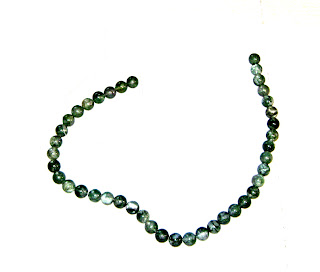 Hello all.
Here are the pictures of the necklaces that need to be restrung.  I do desire that they be knotted.
The moss agate beads will need a clasp.  Not an expensive one but one that is sturdy since the beads are a bit heavy.  It measures 16" with out the knots.
The amber necklace has a peculiar clasp.  One bead has a screw in it and screws into the other bead which has the hole for the screw.  I can't tell how to thread the string through these two beads, but I guess someone bidding on this job will. It measures 18", knotted, but stretched out of shape a little.
The tourquois necklace has a screw clasp which I would to be reused.  It measures 16" unknotted.
I am looking for the most expertise with the best price.  This is my first excurssion into Alchemy, so please excuse any blunders.
Posted by Judy Goddard at 6:48 AM No comments: Links to this post

Yesterday was the ninth anniversary of the homegoing of my father and my aunt.

My father suffered from emphysema, and, after a disastrous mistake in the increase of dosage for his medication, he ended up at the hospital with no way to get better.

On the second day of his short stay my sister and I went to see him in his curtained ICU cubby. He was frail, and disoriented and, we discovered, very afraid. But he would never tell us that! He was from the old school. "Never show your fear!" this WW11 veteran had drummed into his head.


As he lay there, he looked at us and quoted, " I'm tired a' livin' and I'm feared a' dyin'". Hmmm.... that sure sounded familiar, but neither my sister nor I could place where we'd heard it. He was no help! His response was, "I'm not telling you! Go out and find out for yourself!"

As soon as I got home I called my pastor and asked him to visit my father. I felt that his lyrical speech was his way of saying that he truly was afraid. And if he was afraid, then so was I. I took my pastor up to see him and then left them alone. I waited right outside the door to the ICU and prayed and peeped through the window and prayed some more. I never did ask either my father or my pastor just what it was that they talked about.

Two days later, with his family all around, he slipped into the Kingdom God. And I was so glad and so grateful that he had taken the chance to talk to my pastor and I had peace about his passing.

That was on a Thursday. The Saturday following I had to set up and take care of matters for a small concert that was being performed at my church's parish house. My good friend Bruce Davies, Scottish singer of traditional and original songs, was making an American tour.

The concert was a diversion for me, a kind of spate from the deep feelings that the passing of a parent can bring. And it was good to see Bruce! His concert ran about two hours and then he sang his final song...."Old Man River" And there in the middle of the song was the line, "I'm tired of livin' and I'm feared of dyin'"

And for me it was a beautiful confirmation that I had gotten it right. I had done what needed doing for my father and he was, and is, safely living eternally in God's gracious love.

How awesome is that?
Posted by Judy Goddard at 7:30 AM No comments: Links to this post