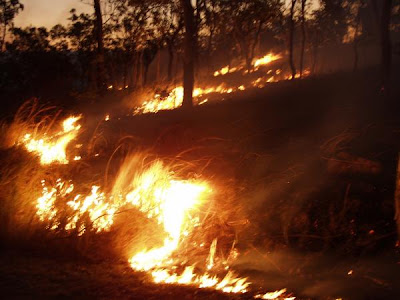 My husband and I went down to our local boy scout camp this evening. Many of our friends were involved in a training weekend. the camp should have been teaming with happy, yelling boys and nearly exhausted leaders.
As we drove up the back roads toward the camp we began to smell smoke. That's when my husband told me he had heard that there was a forest fire in the area. The closer we came to the camp the thicker the smoke became. We began to see wild life along the road, all heading away from the thickest smoke. We passed a couple of fire engines but nobody stopped us.
We finally pulled in to the camp parking lot and there was not a car to be seen. That was erie enough. Then we noticed the empty camp sites, with the tents still in them and gear sitting where it had been dropped. The parade field was littered with half build wooden catapults.
We drove past the dining hall and it was dark in the front but the lights were on in the back. As we headed back out we stopped at the camp master's cabin, where the offices are and found the back door wide open, lights on and noone there. Now it was really ooky!
It was obvious that the folks in camp had been ordered to drop and run. But the big question was, if they had to leave so fast that they couldn't even take down their tents, how did they get all the kids out, with their parents not there to pick them up?
It was seriously scary.
We closed the backdoor and got back into the car and headed towards the fire. (I know!)
We stopped at a friend's house that was nearby to make sure he was safe. He said that there had been a mandatory evacutation, but that he and some neighbors had decided to stay put. As I stood there talking to him, a huge herd of deer hurried through his back yard. After making sure that he was OK we got back in our car and went even closer to the fire. We passed several more fire engines with folks standing around and nobody told us to turn around. As we came off the little lane, on to the highway that led back home, off to the right the sky was an incredible shade of vermillion, and right across the road from our car we could see the fire breaks that the firemen had been setting.
It was really cool seeing the fire breaks right in the pines, just before us! But we turned left and headed for home.
Oh my! what an adventure!
Posted by Judy Goddard at 4:55 PM 2 comments: Links to this post